This is absolutely THE most exciting thing to ever happen to me!

Well, aside from the birth of my daughter. Oh, and my wedding day. And that Champions League final when we came back from 3-0 down at half time. Actually, the day I did a sky dive was pretty intense…ok, let me go out and come back in again…

This is absolutely ONE of the most exciting things to ever happen to me!

My novel, 26 Miles to the Moon, has been selected by Britain’s Next Bestseller for a crowdfunding campaign!

‘Fantastic!’ I hear you cry…followed by, ‘Er, what the hell does that mean, exactly?’

Well let me enlighten you – because this is where you can become my very own hero…and have a bit of fame yourself…while helping an excellent children’s charity.

Britain’s Next Bestseller (BNBS) gives readers and authors a twist when it comes to publishing: it will only publish books YOU want to read. An author submits an unpublished manuscript and if BNBS agree to put it up on their website, the author promotes the hell out of it. If enough people show their interest, then BNBS will give you a publishing deal and the book becomes a reality. Simples.

But there’s more: if you support a book by ordering, you’ll actually get your name listed in the book, as a credited sponsor. Unless you choose to be anonymous, every reader will see your name in every copy as someone who made the book possible!

Wow! So where do I go to tell them that I want 26 Miles to the Moon to be published?

I like your enthusiasm, but I haven’t started my campaign just yet. I’ve only just found out, but I wanted to put the word out now (and I’m so excited I couldn’t hold it back even if I wanted to). I have to get 250 copies committed to in order to reach my target, though. To show BNBS you are serious about wanting the book, you will be able to pre-order a copy (or copies if you’re that enthusiastic 🙂 ) but pay nothing up front whatsoever. If I don’t make my target, you won’t get charged at all, and I won’t get published. Zero risk for you – but for me, I need to convince enough people like you that they want this book, that they want to be a part of it. Therefore, I need time to work out a marketing campaign so that when I tell everyone all the details, it’s all professionally setup and I can hit them with my best shot.

I have this balmy idea. Call it a bribe or gimmick if you like, but I see it as an incentive. If you pre-order, for every book I’ll give £1 of my own money to a children’s charity, Dreams Come True. Not your money, mine. If I don’t make my target, I still commit to giving the money, even if it’s £249 and I don’t get the publishing deal and make absolutely nothing.

Risky? Yep. But what’s the worst that could happen? I only donate to a charity and help a dying kid. ‘Nuff said.

And if you do make the target?

Only then would you be charged for the book, and you’d be one of the first to get your hands on it, getting a copy before everyone else who didn’t step up to pre-order.

I get to be a published author, and you’d have helped make it happen. You’d have earned a HUGE thank you from me!

I’d have donated hundreds of pounds for charity.

I’ll be dancing round my living room with a stupid grin on my face until it’s time for bed. And then I’d still dance some more.

Of course it is! I believe in my novel. BNBS obviously believes it has potential to earn them money, otherwise they wouldn’t have chosen it. I’ll put a lot of effort into the campaign. This is my dream, and I’ll do as much as I can to make it happen, to reach out and grab at least 250 people.

Also, a number of authors on BNBS have already achieved their dreams this way. It proves it works – I’ve actually now got two other books I fancied which have since made it, and both have my name in them as a thanks to their sponsors. Why not me? 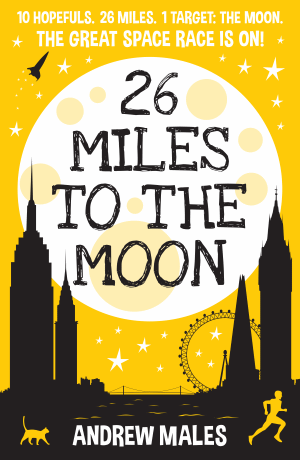 BNBS have all the details to go live, the date of which is 17th October. The campaign will last for 14 weeks. Between now and October I’ll need to work out who to reach and when. I’ve already got tonnes of ideas and have started talking to the charity for publicity help. I’ve got a book trailer video to make (some friends are already working on a 26 Miles to the Moon song!) and as you can see, the fantastic provisional book cover (thanks Claire!) is already complete. Once that’s all done, it will all come together like a plan from The A Team’s Hannibal. Except not in a garage and with less bullets flying around. (Unless I get really desperate for pre-orders.)

I know that this will be hard. I’ve had a lot of good feedback of the book from various readers of its drafts, but it’s another thing to get 250 people to pre-order, even without any risk on their behalf. Assuming each person will only pre-order one book, do I even know 250 people? No, but with a good campaign I can reach many more than that amount. Also as I’ve said before, one of the themes behind 26 Miles to the Moon is to take chances, as you never know where it may take you.

Wanna be one of my heroes?

Keep an eye on my blog and my Facebook page for further announcements.

The Great Space Race IS on…

This entry was posted in Writing and tagged 26 Miles to the Moon, book, marathon, moon, novel, running, space, writing. Bookmark the permalink.