I won’t hide from the fact that my novel, 26 Miles to the Moon, was influenced by what Virgin were planning for their Virgin Galactic missions. I couldn’t help but be inspired by the idea of a company wanting to put normal (albeit normal millionaire) folk into space. But although reaching for space is only part of the plot of my book, I’m amazed how reality is about to mirror my own ideas of two years ago.

The seed for my novel was very much a marathon, and at its heart were two characters faced with differing challenges who at the start had no idea how or even if they could ever conquer them. I mixed in the moon trip as it’s something I’ve always been interested in and I thought the resulting cocktail was an unusual idea. With what SpaceX and Virgin were doing I thought it was only time that our sci-fi ideas of decades gone would finally come true. So it’s with a mix of excitement, pride and disappointment that I read some of the latest news.

Virgin territory
Part of me is excited – my own ideas are coming true! Now, it’s probably a correct assumption that I have absolutely nothing to do with the reality actually happening, but I’m pleased and proud to have had the foresight of an idea that initially looked far-fetched.

The other part of me is a little disappointed in that I didn’t get my novel out before this revelation. It would have been excellent timing and proof that I’d got there first. Now…well, I guess I’m worried people will say that I’ve just copied the idea, mixed it around and extended it. Still, that’s the life of a writer – you don’t know what reality is around the corner. I could have written a unique crime thriller only for it to see it on the news the very next day. Maybe I should write a novel about England winning the World Cup – I think I’m safe from that happening for a decade or two.

However, my book is out there right now with agents to pick up. I don’t know if space news like this will help, but I’d hope that it would make someone sit up and notice. Virgin will make this happen, there’s no doubt. Tourist space exploration is going to – excuse the pun – take off. And with any interesting development that will have its own share of headlines over the next few years, there’s bound to be peripheral interest in the arts that reflect it. Maybe I’ll be lucky and land on the bandwagon just as it starts its engine.

Virgin on the ridiculous 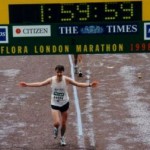 Another reason why 26 Miles to the Moon can make it, is due to the rise in the popularity in long distance running, especially with our own superhero Mo Farah moving into marathons. Paula Radcliffe led the way for the Brits but has now sadly retired. With Mo having a crack at this great distance, marathons should get even more coverage. There has been some talk about Mo running one in under two hours. That’s simply insane. Only possible in Photoshop, as you can see here. Sure, it’s only three minutes off the world record, but the sheer stats of attempting that distance at the required pace are mind-boggling. But that epitomises my book – someone chasing the dream when everyone else says it’s impossible. The greatest achievements man (and woman) have made nearly always start with a dream. Add belief, the ability to work harder than anyone else ever has in order to achieve it and a bit of luck and you’re well on your way. Good luck, Mo, and well done for daring to dream – if anyone has the talent and determination to pull it off, you have.

So what am I taking from all this? Well, to always believe in yourself, for a start. At times, I doubted my own plot, thinking the whole idea was just not sensible. Today, I’m satisfied it’s looking plausible with just enough fanciful ideas to keep it interesting. It’s also got me fired up for my next novel. Can I come up with something good? Why not? Let’s see what I can do.

After all, I’m no longer a novel virgin.