My previous interest in Mexico ended roughly when Maradona took on the entire England team and slotted in one the best goals ever seen, back in the World Cup in 1986. 25 years on (ugh!), I’m here on holiday.

Gooooooooooooooooooooooooool Carrooooooooooooooooolllllll!
Actually, let’s the get the footy out of the way first. Will Andy’s Football Holiday Curse continue? Ever since my first trip abroad in 1987, it is almost 100% guaranteed that when I go away, Liverpool lose; last year I hadn’t even got out of the airport before we crumpled to Blackpool. I used to wonder as a kid if anything I did had a baring on our results, like if I had a good holiday it had to be counteracted by my team losing. Yeah, as if karma would think I was the most important supporter in the world. (then again, maybe I’ve not been good enough for the past 21 years). But I caught a bit of the Mersey derby and was pleasantly surprised to hear the Spanish commentators announce the first goal of two in typical fashion. And there was more – England scrape through to Euro 2012. Maybe I should just stay out here.

But enough of football. I’m in Mexico, south of Cancun and should really be relaxing for two weeks and not concerning myself with sport results, emails and keeping up with Twitter and Facebook. Or blogging. Hmmmm… Here’s some highlights so far…

Hey – funky Yotel hotel! If you don’t know, it’s a short-stay hotel actually inside Gatwick where the rooms are tiny but the style is cool. Purple lighting, folding bed and everything you need. Like the Japanese capsule hotel I stayed in, except about ten times as big. We checked in at night, so by 7am we’re ready.

Man, this plane is having more ups and downs than the FTSE 100 recently. Not sure if we’re flying or sailing across the Atlantic. I get the proverbial bloke-in-front-with-seat-broken-leaning-back-onto-my-lap just to add to the fun. Still, the ten-hour flight goes quite quick; I guess the more long flights you do the less they bother you.

Hotel first impressions: it’s huge! Four hotels in one, all-inclusive, swimming pools, beach, restaurants, wildlife and plenty of transport. Our room is big, with two balconies, air con, two TVs, jacuzzi and a bed that could sleep an entire Mexican family, with space for a guest. We decide to do a tour of the hotel grounds via a mode of transport we haven’t tried yet…

Segway to heaven
We get a detailed demo on how to use the Segway. It’s like half a motorised bicycle with no seat. It looks easy to ride, but then Shell’s first attempt results in her running over the instructor’s foot, curtailing his fledgling football career, it seems. With a little practice, we’re soon zooming around, turning, doing 360s and bunny hops. Ok, perhaps not the last one of those but we’re sorted for the tour and spend an hour going round the whole complex.

Wish you were here? Probably not
The alarm goes off at 6am – we’re gonna see a sunrise! Nothing better than watching the sun slowly appear out of the water, and my camera’s all primed. I groggily look out of the window…hang on…is that? Oh my god, it is – it’s raining! This isn’t how it’s supposed to be – England basking in a heatwave of Florida proportions whilst we sit in watching torrential rain in Mexico. I’ve had enough of rain back home and now have swapped sunny skies for tropical storms. I’m sure no-one will be sympathetic back home, though, even if I come back whiter than everyone else who stayed in the UK.

Chicken Pizza
Our first tour: going to one of the New Seven Wonders of the World, Chichen Itza. Weather is iffy – it could pour down any time it wants to. The crew on the coach bust a gut on the three-hour journey to provide pastries, beer and information. It’s better service than a flight.

Our first stop is a cenote – an underground pool. The weather has got worse and it is spitting as we get off the coach. We experience our first set of Mexican vendors who wish to sell you anything with every step you take. Everyone is stopped to have their photo taken, presumably to be sold it later. One older couple refuse and make a break for it, pursued by the photographer like they were trying to escape over the border. We change and go down to the pool, which is actually very beautiful, in a cave where you look up 100ft to the entrance. The water’s cold and has fish swimming in it, but we both brave it and soon get used to it. I try out my underwater camera pouch to mixed effect. There’s an opportunity for a small cliff jump, which naturally I have to do. It’s a little high, but I don’t think about it and just go off with a little woo of joy in mid-air. Nice – another little bit of dare-devil completed.
Lunch is at a designated stop-off. The food’s not great, with little choice, but it’s included in the price of the tour. The entertainment consists of two men and two women banging their shoes loudly on the floor, dancing round a maypole and one whistling – albeit skilfully – bird calls. Unfortunately this grates after a while, although they up the game by balancing bottles and glasses on their heads. Their finale was a strange dance with a pig’s head(?) and other props. Strictly Come Dancing it wasn’t. 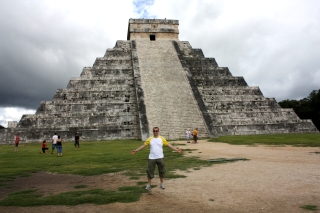 It’s pouring down. My biggest fear today was torrential rain when we were trying to go round and take photos. We step off the coach and the locals make a killing in selling plastic ponchos. Of course we’ll get some, won’t we? “Nah,” says Shell, “It’ll stop and then we’ll be drenched in sweat.” I know there and then that this is one of those couple moments where (to go back to footy talk for a sec) at the end of the day, the final result will be either:
“Shell, you were totally right. Good call.” OR
“Shell, I’m drenched. I’m never listening to you again.”
It’s heavy rain, but there is sun around. I decide to go with her instincts and take the gamble. We get our tickets, go through the barrier and what do you know: it stops and suddenly it’s like standing in a microwave. We are taken round the ancient site by our guide who is very expressive in all his gestures and has eyebrows which could have a career in the West End. We hear about the Mayan culture and eventually we are taken to the big pyramid, which is actually a large calendar. Not the sort of thing you could sit on your desk, though. You can’t walk up it any more, which is a shame but understandable. It’s pretty stunning, aligned perfectly with the stars and with the exact amount of steps to represent their calendar. The only thing that spoils it are the hundreds of sellers who want your cash. “Come! You look!”, “Only one dollar!”, “Almost free!” I have my choice of thousands of miniature pyramids, skulls, ponchos, necklaces and masks. Every few seconds someone blows into a thing that you could buy that makes a jaguar noise (the animal, not the car) which could probably be heard in Cuba. As we left, it started to rain again. Good call. 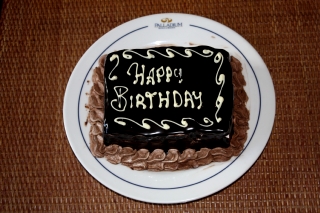 Wednesday brings Shell’s birthday. It’s also my cat’s birthday, but as he’s not here to celebrate, I guess the cake I secretly arrange will have to be eaten by us. We’re up around 7:30 and Shell opens her cards and presents. She said she didn’t want anything more than what I’d bought her at home, but I’m not fooling for that female trap. We have breaky and then I pretend to need to rest in the room as I’m waiting for the surprise cake delivery at 10am. The cake does me proud – a choccy mousse affair that we start on and put the rest in the mini bar fridge. It’s a magic, always-replenished fridge, so you never know, the room pixies might create a new one each day.
The salt water pool is our first destination, one that we share with the fish that are swept in from the sea. The water’s a tad murky but we can do a bit of snorkelling. Large, ominous dark clouds begin to descend on us. It’s gonna rain…it’s gonna rain…it’s raining. We retreat to a beach hut and then to beach sun beds when it eases off, but decide to relocate to the spa pool in preparation for our spa treatments later.

Mexican Masochistic Massages
Shell opts for a facial, me for some combo massage thing that is due to last 80 minutes. I lie down after a Spanglish explanation that I could only work out that it involved elbows. Oh crap.
About twenty minutes into the massage, I decide to never to inflict myself the misery and agony of one ever again. Is this woman tenderising me for some Mexican cannibal banquet? My right shoulder gets a pummelling. Just when you think she’s gone as deep as she can go, she digs in deeper; it’s all I can do to stop the internal screaming from leaping out. Worse thing – the left shoulder is whimpering at the anticipation of its turn.
The actual massage bits – rubbing of the head, stroking arms etc – are great, but it’s not worth the pain. Eventually it’s over and I feel not much different, just more relieved.
I assume Shell’s facial was more relaxing, but she comes out saying that she had been zapped by lasers. If you love pain then Mexican spas are for you.

Dinner was at Ribs ‘n’ More, one of the many a la carte restaurants here. With no money to pay, there’s not a great deal of incentive for great service, so our experience of the non-buffet places hasn’t been particularly fantastic. Tonight though, the waiter is tip-top, even more so when I mention it’s Shell’s birthday. She ends up getting a happy birthday message in sauce with her dessert and then come the tequilas. Our waiter bangs it on the table and then pours it down her neck, before doing the same to me. Our aim is to get drunk and dance the night away, but to do that you need the right entertainment. They have a disco here but when we walk in at 11pm it’s deader than Carlos Tevez appreciation night. We decide to stay, and are rewarded by swathes of party goers coming in after the show outside. This is better, surely? Err, no. Apparently it’s bikini night, which sounds great, aside from the fact no guest is in a bikini and the only semi-naked people are the male entertainment crew. Worse still, the music is a mix of Spanish/Caribbean rap. We wait for it to get better, but it doesn’t. Perhaps we’re too English, too old or have different tastes, but we leave to go back to our room disappointed.
Never mind, there’s still plenty to do and talk about in part 2 later…

This entry was posted in Holidays and tagged Chichen Itza, Holiday, Mexico. Bookmark the permalink.