In 44 days, the England team start their World Cup campaign to end 44 years of “hurt”. No – make that “failure” – squads of 22 players have failed; most of the entire population have been the ones who’ve hurt. Still, in the seven World Cups I’ve experienced there’s been plenty of memories, and I have decided to resurrect this blog to take you through some of my most memorable – both the ecstatically good and world-ending bad.

1982 – Viva Espana! My first ever World Cup, and I was hooked from the start. I’d only been into football for about a year, and after the successes of Liverpool in the European Cup in 1981 and the league in 1982, I was getting used to winning. 1966 was an earlier generation, and coming from a non-football family I didn’t appreciate at first how much international football meant to the country. I quickly learned, though.

I made two fine World Cup related purchases: Firstly, the Panini Espana 82 World Cup sticker album (which I’vejust dug out tonight) and secondly, the official England World Cup record: This Time (We’ll Get It Right) (B side: England, We’ll Fly The Flag) (my very first record purchase) “We’re on our way, We are Ron’s twenty-two…”

There were plenty of memories of 1982, and I’m sure I’ll blog about others later, but this one is for the first England match I watched: England v France.

You couldn’t get much of a better start than scoring within 26 seconds – Bryan Robson coming in and hooking the ball into the French net. What an introduction to my World Cup adventure! 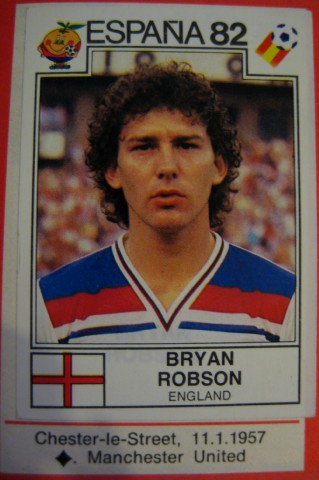 (Bryan suffered a slight injury as this photo was taken)

I probably didn’t realise at the time, but that was a good French team with Platini, Giresse, Battison et al who were destined to get to the semi finals, and then two years later win Euro ’84. For me at the time, we were just beating some foreign team who I knew were close neighbours to us. I don’t remember their equaliser, and even the YouTube replay I’ve currently got open does nothing to bring back the memory. Who cares, anyway. What I do vividly remember is Robson’s second goal – stealing in with a powerful header to make it 2-1. Funnily enough, I’ve always had the image of his bent arm celebration and the stripy sweatband.

As for the third goal, I’m delighted my memory of Paul Mariner’s celebration didn’t let me down. One of the coolest acknowledgements of a goal you’ll ever likely to see in a World Cup match. Ball comes to him…he shoots…he scores…he raises his arms to the crowd with barely a smile…he slowly walks away, mullet trailing behind. Classic. 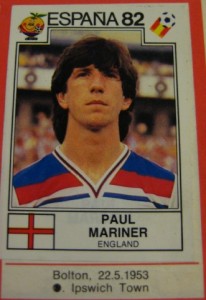 So we beat the French 3-1. Easy. I may as well continue with my memories of England in the tournament, as they are very brief. I don’t recall the Czechoslovakia and Kuwait wins in the first round, and very vaguely the 0-0 v West Germany in the second round group stages, but I do recall the Spain match in which we had to win. It was a tense affair, in which I watched hoping someone would score for us. Surely we’d do it? We couldn’t go out of the World Cup even though we’d not lost? Alas, it ended 0-0, and we went out, leaving me with my first taste of England disappointment.

Strange thing is, until now, I’ve always had a chip on my shoulder about the match, as I remember West Germany and Austria conspiring to knock us out by fixing their match, but after research today, to my surprise this scandal – although real – actually applied to poor old Algeria in the first round group stage. I can’t blame the Germans for our failure this time! Funny how the memory fools you. Still, I do correctly remember two English heroes named Brooking and Keegancoming on to the save the day for us, to no avail. It was their last appearances in an England shirt. Don’t worry Kev – you’ll be back in seventeen years for more disappointment as manager.

That match got me started. 1982 got me hooked. Stay tuned for tears, ecstasy, despair, drugged-up Argentinians, some of the most blatant hacks ever and those damn-awful penalties…

This entry was posted in Timed Runs and tagged England, football, World Cup. Bookmark the permalink.