6:30am Ok, I’m awake. Do I feel like running 13.1 miles today? Let me see. On one hand, the weather is bright and sunny and my legs feel pretty good. On the other, I have what is probably a slight chest infection, the forecast is dodgy and I haven’t run more than 6 miles all year.

Sod it – let’s do it. I’ve paid, it’s local and I’ve done plenty of challenges that I never thought I was ready for.
Stevenage cycle tracks here I come – right after breakfast, of course.

Cornflakes and a slice of toast for my breakfast while my daughter, Amber, has hers. She’s only a toddler but maybe I’ll run the course with her one day. Or perhaps she can help guide my zimmer. My kit has been meticulously prepared last night and even my GPS watch has found some satellites. Given its soak in the washing machine last week, I’m quite surprised it’s talking to me, let alone lumps of metal thousands of miles above us. At 10am I hastily don my trainers and we leave, with plenty of time for the 11am kick off.

My wife, Michelle, is driving me to the start, a few miles across town. However, she insists it’s an ideal time to pop into Argos on the way and buy a last-minute birthday present for her dad. I would prefer to remain focussed on the race and don’t want to risk an Argos-related delay just because order number 239 comes down mistakenly as hair curlers or something. But she’s the driver, I’m the one going out for over three hours, so I stay quiet. 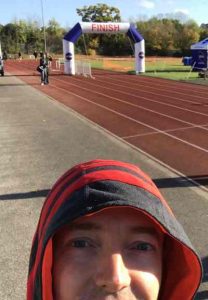 We start at the jewel in Stevenage’s running crown: Ridlins Stadium. They know how to lay on an organised race here. I’m early, so there’s a bit of milling around to do. Might as well use the rather good facilities here and then pretend I’m an elite racer checking out the competition. Or just take a selfie with the finish line in the background in case I don’t make it later.

Once I’m fully ready, I suddenly see a race number and face I recognise from the online world – it’s a Twitter friend who said she’d be running today. Feeling a bit stalker-ish, as she walks past I ask her if she’s Clare, and next minute I know I’ve been introduced to her friends and participate in a group photo, which is a better reaction than running away screaming. Usually I’m a lone runner at these events so it’s nice to have company at the start. We make our way near the back among the 500-odd starters and listen to gentle banter between the runners. You can cut the atmosphere with a spoon.

Honnnnnnnk!
The horn blows and we’re off. My game plan is simple: slow and steady, don’t worry about the clock and see how I go. I simply don’t have the fitness to do anything else; as much as I want to burn off and try for a sub two hour, it ain’t gonna happen. So, first dilemma: do I stay with my new friends, or shoot off? I decide I have to just go at the pace my legs take me and see what happens. After a minute it looks like I’m going to be slightly faster, so although it would be nice to run with someone, I slowly creep ahead of two of them.

2 Miles
I’m loving this new pace. Hills don’t seems half as bad when you’re slow, even if they do take longer. 10 is the new 9, in terms of minutes per mile. We enter Fairlands Lakes and there’s my family! I smile and wave to Amber who seems a bit shocked to see her daddy. A quick greet and I’m off again, hearing her cries as I go.

3 Miles
Nommm nommm nommm! As a kid, you are constantly told not to accept sweets off strangers. But no-one told you that you can’t give sweets to strangers – and that’s exactly what one youngster is doing as we run past. I grab a couple of jelly babies from a tub and thank him.
Here’s my family again. We’ve looped back so it’s an easy walk for them to catch me. This time Amber seems very pleased to see me, even clapping this time. However, I barely move metres away when I hear “Dadddddyyyyyyyy!” and more crying. Maybe next time I’ll piggyback her along the way. 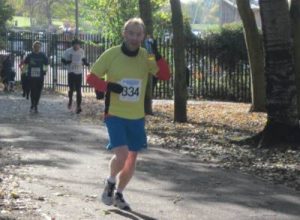 4 Miles
The trouble with the course being your home town that you know very well, is that you just want to go the sensible route. All these underpasses could really be avoided by a quick shortcut across the road. I have a chat with a guy in a vest who’s at the same pace as me. He has a daughter in Amsterdam and recently done the half marathon there, after starting running again this year. Everyone has a story and it’s nice to meet people you’d never normally meet. Unfortunately, our conversation is cut short by a rogue shoelace on my right foot coming undone. That never happens to me when running! Then I remember in my rush to put them on I never checked the laces. Lesson 1: Always sort your laces pre-run. Lesson 2: It’s almost impossible to tie laces on with gloves on. Thirty seconds are lost faffing around, and my new friend is gone into the distance.

5 Miles
I’m going past my old school. If only my old P.E. teacher Mr Bowles could see me now – that scrawny little kid who was average at sport can actually run. Slowly, but he can run.

6 Miles
The start of the killer second loop. It’s so annoying running past the turn for the finish, when you have another seven miles to go. At least there’s a crowd here, who I pretend are there especially for me. I’m feeling good, entering uncharted territory for the year but confident I can make it. Let’s do this. Again.

8 Miles
“Come-on-Andy’s-dinosaur-adventure!”
Of all the tunes to pop into my head, this one from a children’s show is a little random. But hey – it fits my rhythm nicely. Plus my name is in the title so it’s made for me.
I begin to wonder if I’m losing it…

9 Miles
Yeeeessss! I ‘m smiling widely, probably enough to frighten anyone who’s sees me. The reason? I know I’m past the worst and I’m heading towards the finish. I can see the map in my mind, the furthest point of the second loop is behind me. This time last year I was really struggling. Wahoo! Damn, I’m doing well.
I’m definitely losing it.

10 Miles
Where’s my pace? I seem to have only one gear. I’m slow enough to notice how still it is as I cross the expanse of Fairlands Valley for the last time.

11 Miles
Uh oh. I can’t feel my legs. They’re so cold I can’t bend them into anything other than the shape they’re in now with this rhythm. And I have hills to climb. The worse hills. I have to stop. No, keep going. Here we go again – the same internal argument when the going gets tough. Andy’s dinosaur adventure can do one. I have to stop.
I feel ashamed for a few seconds, but know it’s for the best. I expect a wave of people to overtake me, but when only a few do, I realise that probably signals I’m near the back anyway. Time for a mint chocolate Gu gel. Man that’s gooooood! Right, let’s get to the top of this hill and start again.

12 Miles
Just one more mile to go! I’m going to do it! I’ve joined a lady in pink who I might as well run with now. We chat a little just to take our minds off the last mile and a bit. Runners who have finished and are on their way home pass in the opposite direction and I’m impressed by my lack of wanting to strangle them by the same medal that I still have to go through a lot of pain to obtain.
We’re both struggling though, and at different times we stop in the lead up to the last little hill towards the stadium. I’ve no time to aim for and right now no inclination to push myself. Last year somebody helped me run up the hill and I try to repay the favour by encouraging The Pink Lady, but alas she’s stopping. I plod on to the muted cheers of a not-so-packed stadium.

The Finish
To end a half marathon on a track confuses the mind. I’m knackered. I don’t care what time it is. I know I’m going to finish it even if I have to crawl. But…there is red spongy ground underneath my feet! I’m an athlete! It’s 400m to the finish and I’m Michael Johnson! Fly, Andy, fly to the finish! I take off…

200m later and I realise I’m more like Boris Johnson. I hear a shout from behind and I’m delighted to see The Pink Lady has recovered and is not too far away. I would slow down and wait, but let’s face it – I need every second I can get. The line approaches and I beam a wide smile, pumping my arms as I cross the line like a delirious runner who was oblivious to the 400+ runners who had beaten him to it. I snap out of my self-obsessed mode and clap The Pink Lady as she comes in, exchanging a tired high five. Then it’s the goodies: Banana, t-shirt, sugary bite-sized snacks and the medal. My medal. My wonderful, well-earned, goddammit-I-did-it medal.

Post race
I’m handed my bag back at the baggage tent in super fast time, as if they’ve been waiting for me. Then I realise with so few bags left, they probably were. I flop down to change into something warm when I’m suddenly greeted by my Twitter friends, Clare and Peter, who’ve just finished. I attempt a selfie, after which Clare offers to help and takes a good one of me, considering my sweat and obvious exhaustion. I repay the favour and see if Peter wants a photo too, but he’s revelling in his trophy of a cigarette. I go to leave, as Michelle is being the brilliant runner’s wife and picking me up.
“See you next year?” Clare asks.
I think for a second, and realised that I actually enjoyed it this year. It was long, I was slow and embarrassing low down the field. But it was fun, in its own hellish underpassy way.

This entry was posted in Timed Runs and tagged marathon, pain, running, Stevenage. Bookmark the permalink.

One Response to Stevenage Half Marathon 2016