Getting to say the word “testicles” on live radio has been the highlight of my promotional activities so far. Here’s how a self-confessed quiet author has stepped up to put himself out there recently… 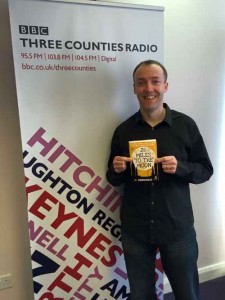 I’m sitting in the studios of a BBC radio station and the live program I can hear pumped through the reception has just announced a local author will be on soon. Flipping ‘eck – they must mean me!

I fiddle with the rapidly-diminishing cup of water as I glance towards my wife, Shell, next to me, giving me a “You’ll be fine” look. I get whisked away downstairs and plonked in front of a wonky microphone while the presenter Nick Coffer wraps up the current section live on air. This is really happening! Don’t fluff your words, Andy. Pronounce your “th’s”. Don’t swear. Don’t say “err” too much. Sound enthusiastic. Be yourself. This could be car crash radio…

Woah…it’s over. Did I survive? A quick check to see I hadn’t disappeared into a hole or self combusted. Hey, that wasn’t bad. Shell’s smiling and impressed. I turn on my phone again on the way home and several texts instantly come in to say how well I came across. I did it. I’m a radio celeb! I go back home with all the swagger of cowboy.

Friday brings another radio interview, and this time it’s local. So local the station’s name is half of my postcode: SG1. Of course, now I’m a seasoned radio professional, this should be no problem. I go alone and enter the offices of a building that previously housed the only nightclub that opened late in town (and a location in Stevenage classic film “Boston Kickout“). Last time I was here I was probably all over the place and slurring my words. Let’s hope history doesn’t repeat itself.

I’m enjoying this! Mike’s introduced me as a “maverick”. The closest I’ve ever got to being called a Top Gun character is “Goose”. Then comes the request. You want me to do what?? Mike’s just announced to the world (well, the part that’s listening) that I will read the first page or so of my novel. Out loud. On the radio. It’s like I’m 12 years old and the teacher has just pointed at me to read the next page in the book as everyone listens.

I now have three options:

I have a few minutes to consider my choice. Number 2 doesn’t look like it’s happening. Number 1 is tempting but I have to face the fact that I have do this sort of thing now. Deep breath…

One page later, I’ve realised that I’ve said the words “Penis”, “Bum” and perhaps my favourite, “Testicles” on the radio.

Maybe an alien circling the Solar System will one day pick it up and wonder what it’s all about. Hopefully he’ll download the Kindle version… 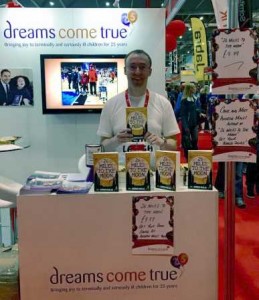 “Getcha copy of 26 Miles to the Moon here! C’mon madam – fancy a bit of a laugh? Something to tickle your fancy? Betcha do!”

Ok, so I’m not really going to say that here at the London Marathon Expo, but flogging copies of my book from a suitcase on a stall does make me feel very Del Boy.

The charity that I raised money for – Dreams Come True – have invited me down to their stall today to see if I can sell copies of my book. I’ve seen a few series of The Apprentice- how tough can it be?

OK, so I’ve just realised I’m not a salesman. There’s plenty of interest, but how do you get runners who’ve come here to register and buy running equipment to buy a book? Smiling nicely in my specially-printed t-shirt and saying “I’m the author!” Isn’t working. C’mon Andy, embrace being out of your comfort zone. Sell it. Baby needs a new pair of shoes…

I’m now in the zone. I’ve got my patter down about the plot, and have leapt on anyone who’s given the book even a slight glance. In a crazy ten-minute period, three signed copies have found their way to new homes. Martin and the girls nod in appreciation. I even have the confidence to go over to the Runner’s World stand and give them a copy of the book in the hope that they might review it. However, by the look on the face of the woman I handed it to, I think there’s as much chance of it making it within their pages as Grey.

By the end of the day, I’ve sold a modest 12 copies, but more importantly I’ve enjoyed myself, learned a lot, and seen first hand how eye-catching my cover is. Add to that meeting Marathon Man Rob Young (world record holder for number of marathons in a year, provider of one of the quotes on the back of my book and all-round hero), it’s been a good day. 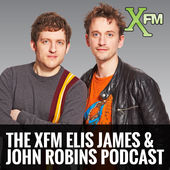 I’ve just been told my book has been mentioned on a top podcast! In a rather fortunate mistake (for me), XFM’s Elis James and John Robins were sent a copy of 26 Miles to the Moon, and so unexpected was it, they spent a few minutes mentioning it on air. I download the podcast and listen with an amazed grin to hear my name and the book’s title on air. Admittedly I hadn’t heard of them before, but they’re really cool, and by the sound of the program, a good laugh.

A week later and I’m mentioned again as the mix-up is discussed at the start of Episode 64. Whose show can I gatecrash next? 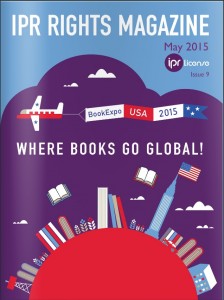 I’ve just seen that the rights to my book are now up for grabs – and documented in a magazine that’ll go out to thousands!

It’s not all about book orders, you know – you can the sell the rights to many aspects of a book. In theory, Penguin could pick up rights to publish in America. Disney could decide the buy the rights to 26 Miles to the Moon: The Film.

Andrew Males is a guy who’s being blogged about!

The infectiously-enthusiastic and kind Justine Machin has done a two-part feature on me and my book at her website Girl Gone Dreamer. She sent me a load of questions for the first part, and the second is her review of my book. My first detailed review! This is all fantastic coverage. She might be up and coming (and a writer, too), but she has connections and is my biggest fan on Twitter by far!

As you can see, books don’t sell themselves, and any help from others is not only appreciated but vital to get the word out. You never know who might see what and when. 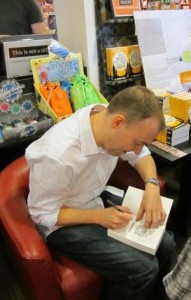 I’m in a branch of Waterstones…with my book on the shelves…and people are waiting in line for me to sign their copy!

I guess this is what every author dreams of. Right now, it’s a bit surreal. There’s getting on for forty people here purely to help celebrate with me the launch of my book. Or maybe it’s the free drink and cake. Either way, it feels like after nearly four years since the initial dream, from the first scribbled words of a potential plot, I’ve made it. 26 Miles to the Moon has made it. If I wasn’t so busy signing and chatting, I might have a drink myself.

Wow! My fantastic publisher, Britain’s Next Bestseller, has just nominated 26 Miles to the Moon for the Costa Book Awards! I find out in November whether I make the shortlist.I might have a slim chance, but you got to be in it to win it…

So that’s it for the moment, but far, far from the end of it. It’s a good base to start from, and excellent experience all round for me; I learned so much in doing all of these activities. I’m also trying to help others, sharing my experiences in the hope they’ll be useful to authors just behind me.

Some days I admittedly feel like forgetting it all and just leaving my book to do its own thing. It’s tiring. It can be uncomfortable. It takes you away from your writing. Haven’t I achieved enough already? Why continue when I can just rest and look back with a smile?

But then…who got anywhere without hard work?

Let’s see how far it can go.