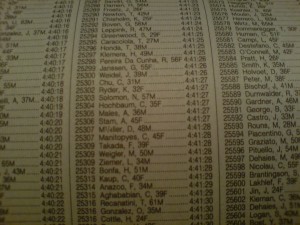 Walking today was a joke – me and Steve both looked like old men who were recovering from hip and knee operations. Staying still for a few minutes just meant any slight ease was completely undone. Going downstairs was a case of just working out which way to lean to avoid putting weight on the worse leg as I took minutes to hobble down. I had more pain today then I had finishing; now new muscles are vying for my attention – even the arch of my foot has got in on the act. It’s bad.

A couple of walks outside didn’t do much to ease it. I had to be careful crossing the street because there was no way my legs could process a “move it!” instruction from my brain. They’d done their part yesterday – today they’d do everything in their own time, thank you very much.

Despite all this, I managed an unbelievable thing: as the sun set over this small New York town I completed a two mile jog.

How can I get you to relate to this? It would be like asking to fight Mike Tyson in his prime, getting beaten up for hours and then phoning him up the next day and asking him if he’d come round to give you a few more jabs. Just like Mike probably would, my legs screamed in disbelief at my masochistic behaviour.

But it had to be done (so Steve said.) 1. A real man would do it and 2. They do recommend doing a “recovery” run the next day, no matter how hard. And boy, was it tough.

It helped, but not loads. I need total rest tomorrow if I’m going to recover enough to traverse the airports to get back home.

Of course, none of the pain really mattered. The day was spent basking in the glory that was completing one of the top sporting events in the world, despite the odds. Lots of analysis followed, and stories too, so it was a great day to be me, especially with my name being listed in the official list of finishers in the New York Times!

Please consider donating to the children's charity that I have now painfully run the 26.2 miles for - details at: http://www.justgiving.com/andymales
This entry was posted in Timed Runs. Bookmark the permalink.

One Response to The day after