I’ve done it. Two years on from the first line being typed, I’ve finally submitted 26 Miles to the Moon to agents. Let the waiting begin… 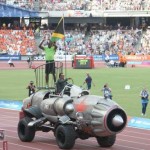 If you’ve been following this blog, you’ve probably wondered what I’ve been up to for the last two months. I had visions of blogging weekly about defining my second book whilst slipping in the odd agent submission for my first. I’ve now realised that’s like planning to run the next Olympics when you’ve got the World Championships this week. You have to be focussed on the single event to give it your all. You can’t be distracted. Anything else and there’ll be no medal, just a long, lonely walk back.

The submission process is hard. Writing the book in the first place is actually the easy bit. Knocking it into shape is painful. They say a book is not written – it’s re-written, and I’m just beginning to see what they mean now. And if my book goes further, I’m sure there will be many more re-writes to come. It’s a world of difference between presenting your manuscript to a friend and submitting officially to an agent. It has to be spot on, has to sparkle, no mistakes, no tricky sentences, no questionable use of adverbs or adjectives, nothing to make a reader say, ‘This guy’s an amateur.’

In terms of proofreading, my novel has come back battered and bruised from two main sources, but has always returned stronger for it. Getting challenging, critical comments back from someone you’re about to marry is not without its dangers, but Shell has always been fair with me and picks up the big issues I need to address. The other, unexpected source – the mum of a girl I used to go to school with (and who I’ve never met) – reduced my carefully-typed prose into a long list of small mistakes. Why hadn’t I spotted them before? Mostly, I think, due to the wonders of the human brain that – inconveniently for me in this scenario – makes corrections for me when words such as “a” and “of” get missed out. Many of them were now invisible to me, hiding like leprechauns waiting to do mischief. Marion – you helped me banish them and turn my manuscript into something more professional, so thank you once again.

Writing’s also about confidence. Anyone who has done anything creative and produced something will wonder at least once if what they have produced is any good. It’s so easy to be wrapped up in your novel and think it’s the dog’s danglies when in fact you have no idea if it’s actually more like the dog’s left-behinds. So when I’ve had other people read it and pass on kind words saying how much they liked it, that has at least made me feel like it’s got a chance of being liked. Thanks to Steve, Colin, Nikki, Amanda, Pat and my aunt Mary who all read a variety of drafts and gave me that warm feeling that maybe it’s got a chance. I hope you weren’t just being kind!

So how did it feel to finally push the submission button? The last time I did that was to the Amazon Breakthrough Novel Award in January, but that was when the pressure was off as I knew it was unpolished and I was just chancing my arm. It was like turning up for a race having done little training and expecting nothing special to happen. Now – if you excuse the switch in metaphors – it’s like entering Dragon’s Den. I’m standing there, exposed, having given my presentation and waiting for the dragons to return their verdict. Unfortunately, in this version they take 6-8 weeks to reply, so please tune in later to see who’s out and who may just want to discuss numbers.

Am I prepared for failure? Yes and no. I’ve been lucky so far in life and not failed at much that I’ve attempted. Sure, I could have done better, but I’ve achieved the odd thing or two when I’ve put my heart into it…and let me tell you – I’ve put a LOT into this book. So part of me will be devastated if they all send me downstairs with an empty wallet to meet that squinty-eyed bloke.

But the other, realistic side of me knows that failure is, statistically-speaking, almost inevitable. It’s not personal, and may not even be an indication of the quality of my novel. Wrong place, wrong time, wrong person reading it…you just don’t know. Some of you may have read my idea or even some of the story and are secretly sniggering at me, thinking I’ve got no chance, that it’s a waste of time trying, that it’s simply not going to be good enough. Yeah, yeah Andy – talk it up and blog about your dreams like your the first person ever to try to get a book published. Cut the pretentious crap and cut to the crying over the rejection slips. Fair enough – why wouldn’t someone think like that? There’s a good chance that you’re right. But so what? Who ever achieved anything without trying? I believe in this book and know it can be a success. Until I stop believing, I won’t give up. If I fail, I’ll try again. If I fail again, then I’ll try Plan B. Although quite why a singer would want my novel is anyone’s guess…

At least now I’m on the road to…something. I’ve had the courage to dream, to act upon my dream and to follow it through to this point. Now comes the exciting point, where every day I’ll check my email a little harder.

Follow my journey – laugh with me, laugh at me if you must, share my pain and see where it takes me.

Wherever I end up, it’ll be because I tried.

This entry was posted in Writing and tagged 26 Miles to the Moon, agent, book, dreams, editing, novel, Olympics, submission, writing. Bookmark the permalink.