For me, Gary Neville’s single-word comment after he gurgled his reaction to Torres rounding the Barcelona keeper about sums up the entire 2011/12 Premier League season. President of the Unbelievable Society, Chris Kamara, would have been proud. Once an adjective used to describe magician tricks and incredible new technology, thanks almost entirely to Sky Football it seems everything on the pitch is now prefixed with this word. Here are 10 of my unbelievable highlights of the season:

1. Arsenal concede 8 goals against Man U.  8-2 between two top clubs?
2. Man U losing 6-1 at home to City. Since when does that happen?
3. That Cisse shot against Chelsea. Was it remote controlled?
4. Kean clinging on to his Blackburn job when everyone from the fans to that chicken hated him.
5. The Anfield Cat having a better run at the home of the Reds than the team itself.
6. Swansea being compared to Barcelona. Would you have predicted that at the start of the season?
7. Fergie losing mind games to Mancini. I thought he was a Jedi Master at those?
8. Utd losing an 8-point lead towards the end of the season. They just don’t bottle it.
9. Man City scoring two goals in injury time to snatch the title from the tonsils of defeat. If I wrote that as a story end, no-one would seriously believe it, would they?
10. Muamba rising from the dead.

From my perspective as a Liverpool fan, the season has been pretty unbelievable, too. Our league form was ridiculous; it got to a stage where I expected us to lose every match – even more so when at home! We hit the woodwork more times than anyone since records began. We hit more shots off target and missed more penalties than anyone else. Stewart Downing hit 72 shots and scored none. I’m sure our Euro 2012 opponents are lying awake at night at the thought of him driving towards their goal.

And yet…the cups. We were almost invincible – sweeping aside City, Utd and Everton on our way to two finals. Just when you thought Cardiff were destined to win, we kept our nerve to lift the Carling Cup. Had we not given Chelsea such a great head start, we might have nicked the FA Cup too.

I also watched my home team, Stevenage, creep into the play-offs trying to gain an amazing third successive promotion. Standing in the terraces on several cold Saturday afternoons and week nights (is it ever warm there?) I saw commitment, team work and attitude that would make many a bigger club envious. They didn’t quite make it, but they gave us some great memories.

And for me, in terms of supporting, football comes down to two main things: achievements and memories. As the seasons come and go and time moves on, that is all that’s really left behind of team performances. 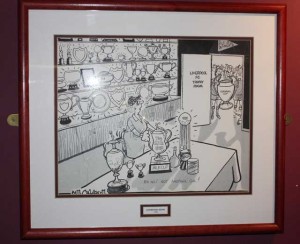 The stats of trophies won; the record number of goals scored; that season when you went undefeated. Pages devoted to your club’s achievements, forever trotted out and attempted to be emulated by the current team.

The memory of that classic match; the heartache of the losing goal; the image of your captain holding the cup aloft. Captured to be replayed for eternity, whether good or bad.

For my two teams, I wanted more achievement and a few nicer memories, but I can’t complain too much. With Kenny gone and the Boro team possibly breaking up, who knows what next season will bring.

But whatever it does, I’m sure some of it will be…well, you know the word.

This entry was posted in Football and tagged football, Liverpool, Stevenage, unbelievable. Bookmark the permalink.